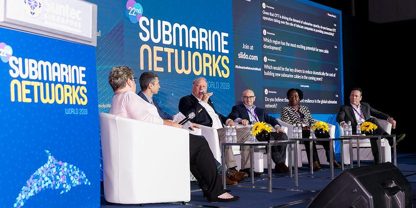 Submarine Networks World (SNW) 2019 brought together more than 800 submarine cable industry participants including decision-makers from across the submarine spectrum for three days of networking and conversation in Singapore. As usual, the event was alive with technical exchanges and discussion of both industry trends and new projects.

DRG’s Elaine Stafford was pleased to have the honor of again chairing SNW’s annual keynote panel, this year entitled “Preparing for the Next Wave of Change in the Subsea Cable Industry.” A big, heartfelt thanks to the other panelists – Funke Opeke of MAINOne, Brian Mass  of RTI, Mike Constable of HMN, Paul Abfalter of Telstra, and Bill Barney of Global Cloud Xchange – for sharing their incredibly valuable insights about the future of the undersea cable market. All of the panelists, not surprisingly, were optimistic about the growth opportunities for the industry, driven by the need for more and more international capacity in our data-driven world. Yet at the same time, they were realistic about some of the challenges we face globally.

For example geopolitics was an inescapable topic, with audience questions overflowing about recent regulatory challenges in the Asia/Pacific region. Somewhat to our surprise, some panelists believe that today’s situation may result in separate global networks which are owned and operated by different strategic alliances. Time will tell. It’s hard to know as it is a real challenge right now aching for a solution. Today’s geopolitical challenges stand in stark contrast to celebrations of China-US nearly 20 years ago, which acknowledged that cable’s importance as a sign of both new international connectivity and cooperation. How that world has changed.

Another interesting topic discussed was that despite the fact that we all talk about the OTT’s dominating the market as they connect their data centers, there are actually more consortium cables being built now than OTT owned cables. Of course, the importance of competitive access, how that  is enabled by regulation, and how that has opened the door to new cables in certain markets (but not in others) which terminate at data centers  was also discussed. This has driven recent cable plans not only on the largest routes, but more recently also to South Africa and India.

Elaine separately provided an update to DRG’s 2018 forecast of new builds ahead. Last year, we forecast that a hockey-stick view of growing demand for undersea cables given the pace of demand growth for capacity vs. the comparative pace of increase in cable capacity capability in the biggest markets of TransAtlantic, TransPacific and IntraAsia – pushing the number of new cables in these markets to about 1 per year in the later years. This

year, we’re predicting the same, with adjustments to reflect the promise of cables with 16 and more fiber pair cables in the coming years. This would have been a seemingly incredible number of fiber pairs just a few years ago. An indicator of the health of the market is the continuing push for both new African and Eurasian cables (connecting India to Singapore and Europe). There was real news about PEACE at the conference, with PCCW Global, Orange and PEACE Cable International announcing a partnership along with rumors of SMW-6 and other Eurasia cables.

Over and above the many additional informative panels and presentations at SNW, like always, the opportunity was an important networking event for all of the attendees. Most of us there were running between meetings like the conference was its own Grand Prix. Some of the attendees actually found the time immediately after the event to watch the real race.

Fortunately or unfortunately, many of us need to decide which of the many important networking events that are coming up in the next few months to attend… whether it be Capacity Europe, Subsea Americas and/or PTC.  Everyone has their favorites and it is hard to choose, especially when we’re all so busy with the market thriving. DRG will, for sure,  be at the annual Sunday Submarine Workshop at PTC again in 2020. This year, we’re expanding PTC’s  workshop agenda, with several invited poster presentations to be shared – many of which are being presented by the SubOptic Association’s Working Groups which are tackling some of our industry’s major challenges. We hope to see you there, if not sooner!